Get me outta here!

I thought I will document this as this is one of the simple and harmless setting that could ruin a lot of time and effort when you are running on tight deadlines to finish the project.

In one of the recent deployments in XenDesktop 7, I came across an issue with the users unable to launch apps or desktops. The issue manifested when users are presented with the desktop viewer for a couple of seconds and it vanished without any error message. It all started  when I began to tweak the gold image for MCS deployment with loads of tuning tips from across the internet.  It could get blazing fast performance as a result but i never knew that one of the recent setting change had rendered the system almost unusable.

Let me give you an overview of my environment as this isn’t applicable to the ones that are not stated below.

The error messages that I could pick up from the servers are below which kind of aided in pointing to the root cause.

The above link from MSDN confirmed that latest OS versions no longer runs DWM as a service but baked into the OS. Guess what, Microsoft also talks about the color depth and it is set to a strict value of 32. That was the root cause of my issue.

In one of the Citrix Policies, I set the color depth to 24 and the DWM didn’t like it and decided not to function. I found the Citrix policy from the Studio and changed it to the below which fixed my issue.

Also ensure that, if you have the Citrix Receiver ADMX template policy set, you need to change it over here via GPMC console. 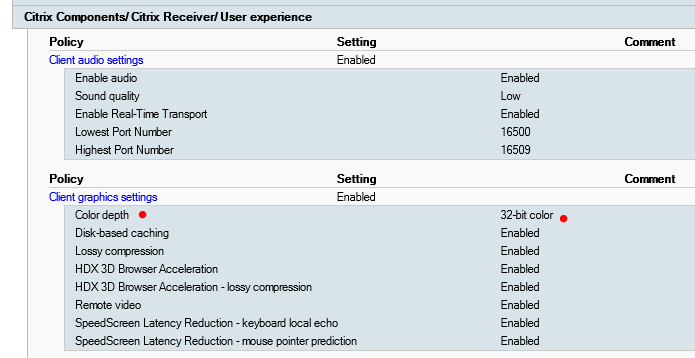 That’s it for now. Hope this helps someone dealing with the same problem.

Please pass your comments below if you didn’t find this working.

One thought on “XenDesktop 7.0 – Users Unable to launch apps and desktops – Desktop Viewer flashes and dissapears”

This site uses Akismet to reduce spam. Learn how your comment data is processed.